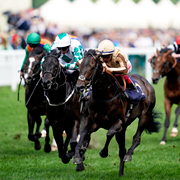 Simon Crisford is no stranger to the Breeders' Cup. In his two decades as Sheikh Mohammed’s racing manager, Crisford played a key role in the victories of Fantastic Light, Daylami and Tempera, who all carried the famous Godolphin Blue to success at America's premier race meet.

Some eyebrows were raised when Crisford departed the operation and turned his hand to training, but he has subsequently shown himself to be a trainer of significant ability. Having already landed more than twenty Pattern contests since saddling his first runner in 2015, Crisford has a fine opportunity to add a Juvenile Turf Sprint to his haul thanks to the progressive filly Al Raya and, to an even greater extent, the latent talent possessed by stable-star A'Ali.

It seems a stretch to suggest A'Ali burst onto the scene following a defeat in a Class 5 Novice Stakes at Ripon, but the speed figure and sectional times of that debut effort had clockwatchers salivating and marked the son of Society Rock out as performer who was well above average. Indeed, so eye-catching was that performance that A'Ali was sent off second favourite for the Group 2 Norfolk Stakes at Royal Ascot, a race that would guarantee the winner a spot at the Breeders' Cup.

Crisford's colt fully justified his tall reputation with a smooth success, always travelling well for a white-hot Frankie Dettori and quickening clear with the smart Ventura Rebel, the pair's class allowing them to pull three lengths clear of the rest.

Dettori retained the ride for A'Ali's third start, again steering the colt to victory in a what was admittedly moderate renewal of the Prix Robert Papin at Deauville; impressive despite the opposition with a good, sustained move on what may well have been the slower part of the track.

That effort set A'Ali up nicely for the Prix Morny at the same track, but, having been deserted by Frankie, he found the combination of stronger opposition and heavy ground too much of an obstacle to overcome, weakening in the final furlong having held every chance two out. Nonetheless, that race has worked out extremely well and A'Ali has subsequently shown his true worth under more favourable conditions.

Back on a surface akin to that which he will encounter at Santa Anita, A'Ali once again showed the pace that has been a hallmark of his career so far, travelling well behind the speed and staying on to land the Group 2 Flying Childers in ready fashion. While this performance lacked the fireworks of earlier displays, it showed that the Prix Morny defeat was not a true reflection of his ability and that the Shaikh Duaij Al Khalifa-owned colt is a top-drawer sprinting juvenile.

A'Ali looked in need of a bit more distance at Doncaster and the Juvenile Turf Sprint will be a sharp enough test for him but - based on what limited evidence we have - it's likely that A'Ali doesn't have much to find to further enhance his trainer's burgeoning reputation.