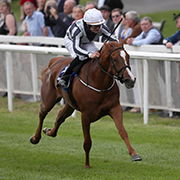 Jessica Harrington had a tremendous time last year with her stable-star Alpha Centauri and although there was no obvious candidate to replace her when she retired at the end of 2018, the County Kildare-based trainer now has a quintet of promising juvenile fillies ready to take up the mantle next season.

Group 3 scorer Cayenne Pepper, the unbeaten Silence Please and Group 2 winner Alpine Star all look set the have a profitable time in 2020, but are currently behind Millisle and Albigna by virtue of the fact that they have both landed Group 1 races, with Millisle having scored in the Cheveley Park Stakes and Albigna having been successful in the Prix Marcel Boussac.

While Millisle looks done for the season, Albigna is ready to go again, aiming to double her top-level tally with victory in the Juvenile Fillies Turf – and you'd have to say her prospects look good.

Albigna first saw the track in May, landing a Curragh maiden before returning a month later to win a Group 2 at the same venue, doing well to win both six-furlong contests given the stamina in her pedigree. The latter race has not worked out well, but the same cannot be said of Albigna's penultimate run in the Moyglare Stud Stakes which has already produced several winners.

Albigna could only finish sixth of nine on that occasion, but ran a bit better than the result. Having her first run for nearly two months, she looked as though she'd been left a bit undercooked, outpaced heading to the final two furlongs but keeping on well. She is likely to meet Daahyeh, who finished second that day, once again in the Juvenile Fillies Turf and shouldn't turn the form around on paper.

However, Albigna's latest run suggests she may have made a significant step forward since the Moyglare.

Sent to Longchamp on Arc day, she was once again one of the first under pressure but this time found plenty as her stamina came into play, leading with 100-yards to go and coming home very strongly to take what looked only a fair renewal of the Prix Marcel Boussac in most convincing fashion.

That victory came on soft ground and therein may lie the negative for Albigna. Despite her early wins over sprint trips, she looks like she's a stayer and might be more of an Oaks type long-term, so it could be that she is caught out around Santa Anita's sharp track on what is almost certain to be firm ground. However, she still looks to be improving as the season goes on and has a leading chance on form, so merits a great deal of respect.