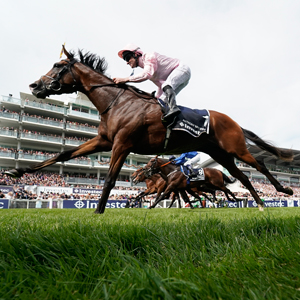 Just under a year ago, Anthony Van Dyck was sent off favourite for the Breeders' Cup Juvenile Turf. Finishing only ninth, it marked a disappointing end to a season that had promised so much but had ended on something of a bum note.

In fairness, Aidan O'Brien's colt had numerous excuses, seemingly unsuited by the yielding ground and suffering from a bad trip in a particularly rough run race. Nonetheless, it left Anthony Van Dyck heading into his Classic season with a reputation to rebuild.

He certainly started in excellent fashion, winning a poor renewal of Lingfield's Derby Trial but winning it with plenty in hand under conditions that would not have suited.

He was next seen in the Derby itself and completed his redemption with a thoroughly likeable display, travelling well, quickening up on the inside and showing great tenacity to edge out four rivals who were beaten less than a length. This tends to back up the impression that this was not a strong renewal and the second, third, and fifth have won just a sole Group 3 between them since. What's more, Anthony Van Dyck is also winless since, although it's fair to say he has not really had things go his way.

This was most definitely the case in the Irish Derby, where he failed to reel in 33/1 shot Sovereign, a stablemate who ostensibly looked to be a pacemaker but was given far too much rope on a track that has been heavily favouring speed over longer trips. While Anthony Van Dyck ran on well into the second, the winner had gone beyond recall.

Worse was to follow for the Classic winner on his next start when, sporting an unedifying set of cheek-pieces, he finished tailed off in the King George. This effort was again attributed to the poor ground, and it may have been that the headgear did not work, but the Derby winner was once again left nursing a damaged reputation.

His most recent start, however, was much more like it.

Freshened up with a three month break for an autumn campaign, a move his trainer has mastered over the years, Anthony Van Dyck shaped with plenty of promise when third in the Irish Champion Stakes. The emphasis on speed would not have suited him, particularly over a suboptimal trip, but he ran well to be third in a race that is already working out, with winner Magical following up in the British equivalent. Given Aidan O'Brien's methods, it is extremely unlikely that he had Anthony Van Dyck at full fitness, especially as the Breeders' Cup Turf looked to be the main target all along.

Conditions at Santa Anita should be perfect for Anthony Van Dyck and it looks as though he has been laid out for the race. Given the record of European-trained runners in the Breeders' Cup Turf, it's not hard to envisage this talented colt once more redeeming himself with another high-profile win.