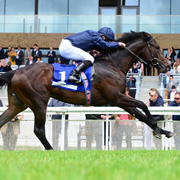 The career of a racehorse can change dramatically in four months. Take Make A Challenge for example, who went from being beaten off 74 in June to running a blinder in a Group 1 on Champions’ Day in October. Over the same period, Aidan O'Brien's Arizona looked to be going the other way.

An eye-catching second on debut before romping home by eight lengths in a Curragh maiden, it was no surprise to see Arizona sent off favourite for the Coventry Stakes at Royal Ascot, a race which typically provides the earliest indication of top notch ability. In victory, Arizona proved he had talent in abundance. A little awkward from the gate, Arizona was held up on the far side and came off the bridle before most, but kept finding, hitting the front just inside the final furlong and doing enough to hold off the late run of Threat.

That win prompted quotes for the 2000 Guineas, but proved to be something of a high watermark in the early career of Arizona.

It was perhaps telling that he missed an engagement in the Phoenix Stakes and wasn't seen for two months before returning in the Prix Morny. Arizona was weak in the market there for a horse with his profile and could only finish fourth, although it was arguably a decent effort against strong opposition given he wouldn't have been ideally suited to the prevailing heavy ground and may well have been short of fitness.

That run should have set him up nicely for the National Stakes, but he proved no match for superstar Pinatubo having been ignored by Ryan Moore in favour of stablemate Armory. Arizona finished a distant third, only just in front of the 93-rated Monoski, and it looked as though his limitations had been exposed.

Looks can be deceiving, however, and there is simply no one better at reviving the fortunes of a horse than Aidan O'Brien. He worked the oracle once more with this No Nay Never colt.

Taking on Pinatubo again, and once more deserted by Ryan Moore, Arizona rocked up in the Dewhurst, going off a 14/1 shot – the same price he had been quoted at for the Guineas following his Royal Ascot win. This time, though, Arizona showed his true colours.

Straight into the lead, he was allowed to set his own pace but sectional timings ultimately show that he made it a fair test. Coming out of the dip, Arizona and Pinatubo quickened clear of the field, battling it out until the Godolphin superstar got on top with 100-yards to run. Nevertheless, this performance proved that Arizona's Coventry Stakes win was no fluke and propelled him back to near the top of a Ballydoyle pecking order that appears to be in constant flux.

That was a clear career best and Arizona ran to the kind of level that would make him highly competitive in a standard renewal of the Juvenile Turf. His trainer has a fine record in the race and Arizona looks to have all the attributes required to win it, so it's entirely possible that he can produce a performance that would make those early Guineas quotes look much closer to on the money.