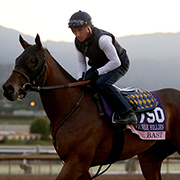 For a trainer of his unquestionable brilliance, Bob Baffert's record in the Breeders' Cup Juvenile Fillies leaves a little to be desired. He has trained the winner of the race just once since the turn of the century, with Indian Blessing in 2007, yet has annexed the male equivalent four times over the same period. He will be hoping that Bast can redress the balance at this year's meeting.

Bast has seen the track three times so far and impressed on each occasion. Sent off at a relatively big price given her connections and hefty sales fee, Bast ran a race full of promise behind Inspiressa, herself a well-touted, expensive filly, in a Maiden Special Weight at Del Mar. The two would meet again three weeks later for their second start in the Debutante and this time it was Bast who would come out on top in spectacular fashion.

Bast was a little outrun on the back stretch there but her stamina began to kick in as they approached the lane and she quickly circled the field before drawing off from a tired-looking Inspiressa, who just clung onto second place having looked to have done too much having got involved in a three-wide duel for the lead. The two who tried to go with her finished miles behind and the suspicion is that Bast may have been flattered, though it’s tough to crab the effort too much when you win by nearly 9 lengths in a Grade 1. It’s also notable that the third and fourth place finishers have come back to run well at the graded stakes level, with Lazy Daisy winning the Pocahontas at Churchill Downs.

Bast herself was sent off at 1-5 for the most recent start the Grade 1 Chandelier at Santa Anita. She always looked like she was going to win there, but was more workmanlike than dominant, with Comical, third in the Debutante, really giving her a race. Despite this, it is clear from her body of work that Bast possesses a fair chunk of ability and her stamina and attitude look bombproof, particularly if the Juvenile Fillies turns into a war on the front end, as it can.

Bast is likely to face a couple of other wide-margin Grade 1 winners in that race. Wicked Whisper ran an 87 Beyer when making all in the Frizette, looking seriously talented as she had everything beat with two to run. Much will depend on how much pace pressure she gets and there looks to be an inverse correlation between her chances and that of Bast – the faster Wicked Whisper goes, the more it'll suit Bob Baffert's filly, and vice versa.

The other potential fly in the ointment is British Idiom, a relatively cheap purchase at 40k compared to the half-a-million dollar price that both Bast and Wicked Whisper fetched. Like Wicked Whisper, she is also unbeaten in two starts and won the Alcibiades by six lengths last time out having tanked through the contest. It's hard to split this trio and all three of these fillies look right out of the top drawer. If they all show their best at Santa Anita the 2019 Juvenile Fillies is going to be a real showdown – Baffert has a real chance to better his mark in the race, but it’s not going to be easy.