In profile: Bricks And Mortar 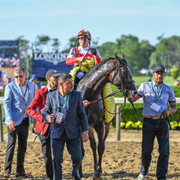 The Breeders’ Cup has seen the addition of several new races over the last decade, necessitating a switch to a two-day meeting. Perhaps one of the few gaps in the schedule is a ten-furlong turf race for males. Ultimately, I would argue that such a race isn't a great idea is it would weaken both the Mile and the Turf, but its absence means that connections of a horse like Bricks And Mortar have a difficult decision to make.

After a promising three-year-old season, Bricks And Mortar was off the track for 441 days before making his return just before Christmas last year in an Optional Claimer at Gulfstream, which he duly won. Since then, Bricks And Mortar has proved well worth the wait, winning all of his five starts in 2019.

His first success of the year was perhaps the most important, landing the Grade 1 Pegasus World Cup Turf Invitational Stakes and the staggering $2 million first prize. Bricks And Mortar still looked a tad rusty there but had enough raw talent to dispatch a field of legit top level performers, including Aidan O'Brien's Magic Wand.

A scrambling win against inferior opposition in a Grade 2 handicap at Fair Grounds was less impressive, but set him up nicely for two big mid-season Grade 1 targets, the Turf Classic and the Manhattan Stakes. On both occasions Bricks And Mortar showed a smart turn of foot and was strongest at the finish in seeing off what by European standards was fairly weak opposition.

Bricks And Mortar was last seen in the Arlington Million, where he once again ran down Magic Wand to provide a nice symmetry to his season. This was arguably his most visually impressive performance yet, travelling very strongly to the lane and again quickening up nicely when set down for the drive.

Magic Wand has since gone onto finish second in the Irish Champion Stakes, franking the form and giving an indication that Bricks And Mortar should be able to mix it with the best European runners. But will that be in the Turf or the Mile?

There is no denying that Bricks And Mortar is strong at the finish over the 10f distance and his pedigree certainly suggests that the Turf might be the better choice given his dam was a winner over the distance and he's a half-brother to three-mile hurdle winner. With that said, it's clear that he also possesses a change of pace that suggests a well-run mile might see him in an even better light, bringing his extra stamina into play.

There is a lot on the line for Bricks and Mortar. The chaos in both the three-year-old division and the Classic division means he has a real shot at Horse of the Year should he go on to victory and any horse but McKinzie or Code of Honor win the Classic. In truth, he will be a finalist for the honor regardless should he be victorious at the Cup.

Recent reports suggest that Chad Brown is leaning to the Turf, based on how relaxed he’s been in his recent track work. My best guess is he’ll cross enter and make the final decion based on the draw and final composition of the field. Whichever race connections opt for, Bricks And Mortar has the talent and attributes to pose a serious threat to whatever opposition he faces at Santa Anita this November.

In profile: Bricks And Mortar