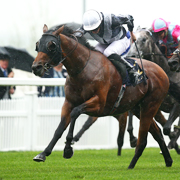 When Circus Maximus landed a mile maiden on heavy ground at Gowran Park last September, it was hard to envisage that he would go on to become a top-notch miler in his Classic season, particularly given the staying-on fourth in the Vertem Futurity and victory over 10f in a recognised Derby trial at Chester on his seasonal debut that followed.

Indeed, Circus Maximus actually went on to contest the Derby, where Frankie Dettori rode him to a sixth-place finish behind stablemate Anthony Van Dyck. With over three decades of experience in the saddle, it's fair to say that Dettori has a good understanding of what is underneath him and it's telling that Circus Maximus was cut back by four furlongs to contest the St James's Palace Stakes on his next start, the Italian clearly believing that speed was the horse's forte, a view supported by the TPD striding data.

And so it proved. In a victory for the combination of modern analytical techniques and good old fashion feel, the blinkered-first-time Circus Maximus found the drop in distance very much to his liking. Always well positioned by Ryan Moore, he was off the bridle before many but really responded from the 2f to the 1f pole, taking up the running and having enough left to turn away a dual assault from John Gosden-trained runners, outgaming Too Darn Hot and having just enough in hand to deny the late rattle of King Of Comedy.

He would reoppose with Too Darn Hot on his following start in the Sussex Stakes but this time would prove no match - Gosden's colt having returned to the kind of form that had earned him Champion juvenile honours the previous season. Nonetheless, Circus Maximus ran a valiant race to finish second, clear of the rest, and had earned himself a crack at the International Stakes at York, going back up in distance once more to tackle the 10f trip he had scored over in the Dee Stakes.

Circus Maximus could only beat two home on that occasion, with the combination of the extra yardage and having to make the running ultimately not showing the son of Galileo in his best light. That said, he was still in front at the two furlong pole and didn't disgrace himself despite beating only two home in a messy contest.

Understandably, connections opted to return to a mile on his most recent start and it once again proved the tonic as he held on to beat Jacques le Marois winner Romanised by a nose in the Prix Du Moulin, having to survive a stewards' enquiry on the day and a subsequent appeal from Romanised's connections, who were convinced their horse would have won had he not been hampered by Circus Maximus.

Controversial as that win was, it once again highlighted traits that are now fairly apparent in Aidan O'Brien's colt: a preference for a mile, a tenacious attitude and a desire to hang left.

Those first two qualities will stand him in good stead at Santa Anita and it is certainly hoped that the last named will be less prevalent in the Breeders' Cup Mile, particularly given how beautifully he moved around Chester's tight, left-handed turns – often an excellent pointer for horses who will succeed in the USA. Provided he is well drawn to go forward, he has sound prospects of giving his trainer a long overdue win in the race.