In profile: Code Of Honor 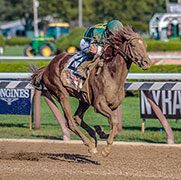 It's hard not to feel sorry for Noble Mission. A full-brother to the legendary Frankel, he was always destined to live in the shadow of his famous relative but was a tremendous racehorse in his own right. Talented and as tough as nails, he won three times at Group 1 level, including when winning the Champion Stakes on his final start.

Noble Mission isn't an obvious source of top-class main track runners on paper, given he is by Galileo out of a mare who raced only on turf, but he did have the relentless, grinding run style that is so effective on dirt. He looks to have passed this trait, and all of his class, onto Code of Honor.

At one stage, it looked as though Code of Honor might never be in this position, as he endured a fairly luckless career following a successful debut in a Saratoga maiden.

His final start as a juvenile marked him out as a colt of serious potential, as he finished second in the Grade 1 Champagne Stakes despite everything going wrong. He nearly lost jockey Eric Cancel when stumbling badly at the start and then appeared to resent the kickback, ending up far behind after the first quarter. He eventually began to warm to his task and took off at the three-furlong pool, looping five wide around the field and running on well behind the front-running winner Complexity.

Code of Honor proved disappointing on his next start in a minor Stakes race, but was certainly short of fitness there and showed his true worth next time in the Fountain Of Youth Stakes, getting up late to land the Grade 2 contest with a perfect trip.

Up next was the Florida Derby and, once more, Code of Honor did not have things go to plan. He ended up covering most of the track that day, stuck three- or four-wide for the majority of the race before being switched to the inner with three furlongs to run. He could never land a blow on the front two who had things their own way on the front end, but did stay on well into third behind Maximum Security despite looking wayward in the straight.

Code of Honor would subsequently fill the same spot behind the same horse in a hugely controversial Kentucky Derby, eventually placed second after first-past-the-post Maximum Security was disqualified, having hung right at the top of the lane and then interfered with Code as he came back in. That was a good effort from Shug McGauhey's charge, however, who looked to be building to something better.

And so it proved. Given a break after Churchill Downs, he returned at Belmont as an odds-on favourite in the Dwyer and made no mistake, coming from off the pace to surge to the lead in the straight and win by three lengths. In the process, he looked to be growing up right in front of our eyes.

Code of Honor was now starting to look like the total package and confirmed that impression in the Travers Stakes on his penultimate start, ending up eight wide off the final bend but powering through the line to again win by three, recording a career best Beyer of 105.

He would top that when hitting 106 on his most recent start in the Jockey Club Gold Cup, a race in which Code of Honor was once more involved in controversy. The small field probably wouldn't have suited him, but he still looked set to take the measure of front-running Vino Rosso until that rival baulked him mid-stretch. Vino Rosso continued to hang into Code of Honor until the line and it was no surprise that the result was reversed given the winning margin of just a nose.

Having been non-committal about Code of Honor's Classic participation both before and after the Gold Cup, McGaughey has confirmed his stable-star is training well and is set for Santa Anita on November 2nd. Code of Honor looks to be improving all the time, which is no surprise given he was an extremely late foal, technically still a two-year-old when running in the Kentucky Derby. Provided he gets the luck that had once appeared to desert him, he looks set to end his season with a bang.

In profile: Code Of Honor