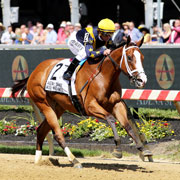 One of the more surreal horse racing moments of 2019 was seeing Donald Trump tweeting about the controversial result of this year's Kentucky Derby. It was unusual enough to see a POTUS weigh in on his country's most famous horse race, but the content – in which Trump blamed “political correctness” for the disqualification of first-past-the-post Maximum Security – featured the kind of rant that the leader of the free world publishes on the platform with what seems like ever-increasing frequency.

It is not the first of Trump's tweets that has passed into infamy. On May 31st 2017, Trump tweeted "Despite the constant negative press covfefe", which instantly went viral due to his misstep when apparently attempting to spell “coverage.” That tweet was subsequently deleted, but the term “covfefe” continues to feature prominently, in no small part thanks to the exploits of Brad H Cox's filly of the same name.

Covfefe has always had a tall reputation and burst onto the scene in September last year when she romped home by nine lengths in a Maiden Special Weight at Churchill Downs. Having started 1-2 for that contest, she was sent off only marginally bigger next time out despite contesting the Grade 1 Frizette.

Covfefe proved disappointing there, not seeming to stay the mile trip, and it was no surprise to see her cut back in distance when she finally returned in April of this year. Despite scrambling home in a 75k Optional Claimer, and recording a Beyer of just 84, Covfefe was once more sent off favourite when returned to Graded company for the Miss Preakness Stakes at Pimlico. It was here that Covfefe showed her true worth.

Under no more than a hand ride, the daughter of Into Mischief romped home by eight-and-a-half lengths, putting up a huge speed figure in the process, her 107 Beyer the best number run by a 3-year-old filly this year.

I identified her as a likely winner of the Filly & Mare Sprint after that run, but a subsequent defeat in a minor stakes race called that assessment into question. I kept the faith, thinking that connections were trying to get away with running her that day as more of a workout than a race to which she’d been pointed. Her subsequent runs have suggested that I might just be right.

She showed good courage on her penultimate start to take the Grade 1 Test Stakes, out-finishing Kentucky Oaks winner Serengeti Empress, with the pair pulling over eight lengths clear of the third, Bellafina, who had previously won the Santa Anita Oaks.

And Covfefe confirmed she was back to her explosive best last time out, destroying a minor stakes field by eight lengths and once more running a 107 Beyer.

While this provided further evidence that Covfefe has the ability to win the Filly & Mare Sprint, some will recall the seeming “bounce” after running huge at Pimlico and think she may do so again. But I really think that was more a case of sneaking an extra race on the calendar as opposed to a true reaction from the big effort that will be repeated. This race was surely on the calendar at least since May. The bigger issue may be her rival Come Dancing, who has also looked top notch this season, but I’m sticking with my idea of Covfefe as the winner of this one. I’ll admit that she definitely has to prove her ability to run big numbers back-to-back, but if she is able to do so she will – to borrow a phrase from racecaller Travis Stone on her debut -- trump her competition once again.