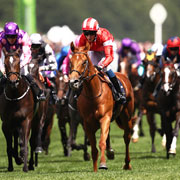 When Pinatubo blitzed his National Stakes field by nine lengths in September he effectively ended the debate, at least in terms of ratings, about who would be the champion European-trained juvenile colt. When it comes to the distaff division, however, things aren't quite so clear cut.

Timeform currently have Millisle top rated, with Jessica Harrington's filly having recorded a rating of 115 for her Cheveley Park win. The likes of Raffle Prize, Love and Millisle's stablemate Albigna sit a few pounds behind, although with that trio not certain to run again this season the 106-rated Daahyeh may hold a crucial advantage as she still has one more dart to throw.

Roger Varian's filly currently has about 10 pounds to find to topple Millisle, but this progressive, consistent sort might be capable of better yet.

She has always been a filly who has been held in the highest regard, having started clear favourite for every run apart from her debut, where she shared favouritism prior to making a winning start from the aforementioned Raffle Prize in what was likely one of the best novice contests run this season.

That performance marked Daahyeh out as a Royal Ascot type and it was no surprise to see her turn up in the Albany Stakes next time out. Favourite backers had few worries in that contest as Daahyeh travelled sweetly throughout, led inside the final furlong and powered home, doing all of her best work in the final furlong of what sectional times show was a strongly-run affair.

Although bred to sprint, stamina seemed her forte in that contest and the emphasis on speed appeared to catch her out next time in the Duchess of Cambridge Stakes at Newmarket. She could only finish second to old rival Raffle Prize, who carried a penalty but was able to overcome the burden thanks to an enterprising ride by Frankie Dettori, who bagged the rail under highly conducive conditions for front-running. Daahyeh did well to finish second, having to challenge widest of all from off the pace in a race where closers were at a distinct disadvantage.

Daahyeh was next seen in the Moyglare Stud Stakes, her first attempt at Group 1 level. Off a two-month break, the daughter of Bated Breath appeared rusty, perhaps also not entirely at home on the rain-softened ground, coming off the bridle with three furlongs to run but keeping on well to finish second behind Love in a fair-looking renewal of what is typically an informative contest.

Just 12 days later Daahyeh was back on the racetrack, workmanlike in landing the Rockfel Stakes at Newmarket to guarantee her place in the Juvenile Fillies' Turf despite her jockey suggesting she did not handle the dip. She will have no such issues at Santa Anita and is a straight-forward, handy sort who should be well suited by the American style of racing and firm turf going. Despite her pedigree, the mile looks within her grasp and there is a strong chance that Daahyeh will take her form, and rating, to a new level given these conditions.