This improving five-year-old will bid to give handler Joseph Orseno a long-awaited third Breeders' Cup triumph. 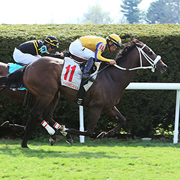 It's been nearly two decades since Joe Orseno landed two Grade 1 wins at the 2000 Breeders' Cup, but he might just end that drought in this year's Turf Sprint with Imprimis.

This gelded son of Broken Vow has been something of a slow burner, but looks to be hitting his best stride aged five. Having scrapped his way up via optional claimers, he was able to land a couple of minor Stakes races in 2018 but to that point had found the jump to Graded company beyond him.

This year, however, he has hit new heights, stamping himself as a contender for the Turf Sprint when romping home in a Listed sprint at Gulfstream and then overcoming a bad start in the Shakertown to give weight and a beating to Bound For Nowhere, who had been beaten less than a length in the Diamond Jubilee in 2018. Bound For Nowhere went on to run at Royal Ascot again this year and his conqueror at Keeneland joined him on the plane.

While Bound For Nowhere once more tackled the Golden Jubilee, Imprimis contested the shorter King's Stand Stakes with Frankie Dettori taking the ride.

Imprimis could only finish sixth there but actually ran rather well, pushed along earlier than most but making some fair progress in the hot part of the race, just unable to match the leaders close home. That looks some of the best European sprint form on offer, however, and four of those who beat him have either won or be placed in Group 1 subsequently. In form terms, that should make him a leading contender for a typical renewal of the Turf Sprint.

Other factors such as a lack of medication, the straight track or the journey over may also have counted against him that day and the race doesn’t look bad at all in hindsight, thus it was no surprise that he was sent off as favourite for the Grade 3 Runhappy Turf Sprint at Kentucky Downs on his next start. Kentucky Downs is a very testing course, however, not an easy place to thrive off of break, and this season it has largely favored frontrunners. Imprimis appeared to run a tad flat there when finishing only fourth, but may have needed the race after his Ascot expedition and didn't get the best of runs in the lane anyway. Excuses abounded.

That was also the case on his most recent run in the Woodfoord Stakes, where Imprimis travelled like a dream into the stretch but was cut off by eventual runner up Leinster at a crucial stage. His response when uncoiled by Paco Lopez suggests he would have gone very close to winning, or at the very least would have emerged as the best horse at the weights.

That latest effort hinted that Imprimis might be rounding into form at just the right time and he certainly has the ability to figure in a race that US-trained runners have dominated since its inception. With a bit of fortune in running, he may allow his trainer to finally taste Breeders' Cup glory again.