Runner-up at Royal Ascot, Kimari has scored twice in the US since and looks the one to beat in the Juvenile Turf Sprint. 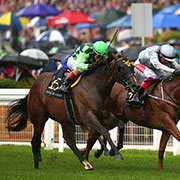 The 2019 Breeders' Cup is shaping up to be a fascinating affair with some potential champions and some intriguing rivalries, but the one horse you simply have to watch is Kimari. Wesley Ward's speedball is spectacularly fast and it's could be a case of 'blink and you'll miss it' as she blitzes her way around Santa Anita.

From day one, Kimari has been both very quick and very good, and her racecourse debut was something to behold. She was off a bit slow that day, betraying her inexperience, but quickly recovered to lead at a good gallop. It looked as though she may have a race on her hands at the top of the stretch, but she started to lengthen and just went further and further clear, eventually coming home a 15-length winner.

As an impressive debut winner for Wesley Ward, there was only one place Kimari was going next: Royal Ascot.

Sent off a 13-2 shot, she once again showed tremendous pace, heading off twenty-four other rivals from her high draw. It looked with two furlongs to run that she had burned her rivals off, but the combination of a stiff five furlongs and soft ground saw her stamina ebb away, collared and passed in the final furlong by Raffle Prize. There was no shame in that, given the subsequent exploits of the winner, and Kimari had proved that she was a filly of serious quality.

Wesley Ward gave his star filly a couple of months off following that run, understandably as she looked to have had a hard race, bringing her back at Saratoga in the listed Bolton Landing Stakes. Her five rivals proved well overmatched, with Kimari off a bit slow again but once more quickly to the lead, from which point she never saw another rival, storming home to win easily by four.

Kimari's most recent run was in the Indian Summer, a minor stakes race back at Keeneland, and her performance was again remarkable.

On this occasion, the daughter of Munnings broke fairly well, but was reined back by Mike Smith in what seemed like a deliberate move, hunting around at the back. In hand but well back at the top of the lane, Smith swung to the outside and set Kimari loose. Within the space of a furlong, she had burst from last to first, showing top class last speed to go with her early pace.

That win gives Kimari more options, proving she is not just a one-dimensional front-runner but that she can also rate with the best of them. She looks to be the complete package and it is hoped that she can confirm this impression by showing her class at Santa Anita. If she does, this year's Juvenile Turf Sprint could be at her mercy.