The likely Breeders' Cup Classic favourite must overcome track and trip to score at Santa Anita. 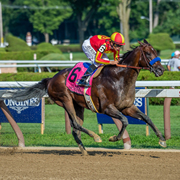 In last year’s Breeders’ Cup Classic at Churchill Downs, McKinzie was disappointing, briefly contesting the pace before finishing well back in the field. Earlier that year, he’d shown an immense amount of promise. In fact, if you’d asked Bob Baffert in early 2019 who his best three-year-old was, he’d almost certainly have tabbed McKinzie rather than eventual Triple Crown winner Justify for that accolade.

An injury sidelined McKinzie before the Kentucky Derby, but he did come back to win the Pennsylvania Derby before the Breeders’ Cup. He returned to the races in December, where he ran a big race but lost to the ill-fated Battle of Midway. This trend continued for much of 2019: McKinzie ran well but finished second in the Santa Anita Handicap, Met Mile (with a horror trip), and his prep for this, the Awesome Again.

In his other two starts, he horrified an overmatched field in the Alysheba at Churchill Downs and looked like a potential Classic victor in the Whitney at Saratoga. On his best form he’s looked like a worthy Classic favorite this time around. But there are a whole lot of questions.

McKinzie doesn’t appear to be the most straightforward ride. Mike Smith was pilloried for his ride in the Met Mile and again in the Awesome Again. In the latter race, he was kept wide and not engaged early, chasing eventual wire-to-wire winner Mongolian Groom around the track. Even in his seasonal highlight, the Whitney, Smith was very active, carefully positioning his mount throughout the race. The difference was simply that Smith’s tactics worked out well that day, as opposed to those other two races. I think it’s possible that McKinzie simply isn’t as push button with his acceleration as other recent Baffert stars (American Pharoah, Justify) and Smith was simply taking the extra measures he thought necessary to win.

Connections have decided to go another direction and McKinzie will be ridden by Joel Rosario in the Classic. I would imagine Plan A will be to go forward and play come-and-catch-me with the field. The jockey change, while not seeming entirely fair to Mike Smith, doesn’t bother me too much in terms of assessing his chances.

There may be bigger issues for McKinzie, however. For one thing, he doesn’t really act like a 10-furlong horse. He finishes his races OK, but doesn’t seem to be crying out for more ground. And then there’s the fact that he’s failed to win in his last three races at Santa Anita, two of which were contested over the new, deeper surface that was tweaked earlier this year. It’s possible he just isn’t shown to his best effect at Santa Anita, and unfortunately for him, that’s where the Breeders’ Cup is being run.

Earlier this year, I was asked by the Breeders’ Cup to submit weekly rankings for horses in the Classic division. Every single week I have listed McKinzie as the number one contender. Despite this, and the fact that mathematically he is among the two most likely winners, I don’t like him as a bet in the race, at least not at current odds of 4/1.