Steve Asmussen's filly will arrive at the Distaff on the back of a perfect 7 from 7 season. 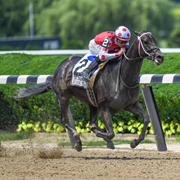 Midnight Bisou returns to the Breeders’ Cup Distaff in 2019, having not lost since the 2018 running of this race. Since then she’s been a perfect 7-for-7, winning at five different tracks, all at the distance of this year's race or a sixteenth shorter, beating the best her division has to offer.

As a three-year-old she established herself as a star and would have shone even more brightly if it wasn’t for her rival Monomoy Girl, who beat her in the Kentucky Oaks, CCA Oaks, and eventually the Distaff. Monomoy Girl finished ahead of her in the Cotillion as well, but Bisou got the race in the stewards’ room.

This year Midnight Bisou has taken a step forwards, and with Monomoy Girl sidelined all season, she has taken her place at the top of this division. Her seasonal high point for me came at my expense in the Personal Ensign at Saratoga where I needed Elate to win badly and would have tripled my bet as the horses turned for home. Elate was cruising and Midnight Bisou was being ridden. But Bisou’s class kicked in and while there was some controversy (and another inquiry) about the bumping in the lane, she was game in just eking out a nose victory. She’d looked vulnerable in her previous run at Monmouth, but at Saratoga she proved she was better than ever.

In the Beldame at Belmont, her most recent start, it appeared on paper that she couldn’t be beat and she obliged at miniscule odds. Figure makers disagree about the quality of the performance. She earned just a 91 Beyer Speed Figure but TimeformUS has the race the equivalent of a 98 speed figure, more in line with her career norms. I’m inclined to take a more positive view of the performance, given that it took place on the inside part of the track, which appeared to be tiring.

She goes to the Distaff deserving to be a big favorite, especially because I’m guessing two of her biggest market rivals will be choosing different targets. I’m guessing Elate will head to the Classic – the 10 furlongs possibly being a better fit for her – and I think Guarana will enjoy cutting back to the FM Sprint – a race that should suit her. That still leaves some serious competition for Bisou in the form of Paradise Woods, Dunbar Road and Street Band, but that performance in the Personal Ensign leaves them all plenty to find.

That said, she will be facing the latter two three-year-olds for the first time and they’ve both shown real talent and are on the improve. Price will be the guide here – she is the most likely winner but at less than 2-1 I think I’ll take a shot against her with Dunbar Road or Street Band. But it wouldn’t be the first time Midnight Bisou proved me wrong.