A superstar on the east coast, Mitole arrives at the Breeders' Cup Sprint with a near-perfect record. 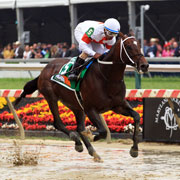 One of the most interesting aspects of American dirt racing is that dirt horses can be more flexible with regards to distance, so you often see top performers campaigned over a wider range of trips than their European counterparts. Dirt Mile favourite Omaha Beach, for example, has recorded back-to-back Grade 1 victories over nine furlongs and six furlongs this year, something almost impossible to imagine occurring on turf.

Equally inconceivable is a match-up between a top grass sprinter and a top grass middle-distance horse, yet the equivalent on dirt actually occurred in this year's Metropolitan Handicap, as the likely favourites for the ten-furlong Breeders' Cup Classic and six furlong Breeders' Cup Sprint faced off over an intermediate distance of eight furlongs. To put this in context, imagine the winner of the Diamond Jubilee Stakes taking on the winner of the Eclipse; Blue Point vs Enable over a mile.

In the Metropolitan, victory went to the sprinter, Mitole, with the Classic hope, Mckinzie, in second. That doesn't really tell the full story of the race, though.

Whereas on turf a horse stepping up in distance are frequently held up to get the trip, dirt racing favours speed and track position to a far greater extent. In this regard, Mitole's early pace proved to be crucial. He was soon tracking the leader with his main rival held up towards the back. Having settled well, he travelled strongly into the stretch and produced a decisive turn of foot in the final furlong to turn away Godolphin's Thunder Snow. Mckinzie, meanwhile, was still full of run, but found his path blocked repeatedly, storming home when in the clear for a desperately unlucky second place finish.

In emerging victorious, Mitole was recording his seventh straight win and it was no shock to see him sent off as a 1-2 favourite for his next start in the Alfred G. Vanderbilt Handicap at Saratoga, particularly given it was back over his favoured six-furlong trip.

However, things did not work out for Mitole there. He had a hard race when stretching his stamina in the Metropolitan and was left a bit short for the Vanderbilt as a result. What's more, he also ended up racing on the worst part of the track, with these factors contributing to a disappointing third placed finish, some seven-and-a-half lengths behind the diminutive Imperial Hint, who makes up for his small stature with a big heart.

Despite this defeat, and Saratoga's reputation for the being 'the graveyard of the favourites,' bettors kept faith with Mitole when he returned to the The Spa a month for the Forego Stakes. This time, they were rewarded.

Sent off a shade of odds-on, Mitole showed his true colours over the seven-furlong trip, romping home by three lengths from the talented Firenze Fire. That effort should set him up perfectly for the Breeders' Cup Sprint and, his blip in the Alfred G. Vanderbilt aside, Mitole has basically shown himself to be nearly untouchable at the six furlongs over which that race is run. He will need to reverse the form with Imperial Hint, however, in what promises to be an enthralling clash.