Richard Mandella's colt has emerged as one of the stars in 2019 and is set to line up in the Dirt Mile. 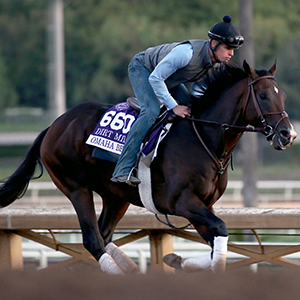 All racing pundits have written lines that we regret. Omaha Beach inspired my most egregious example of one of these. After he was defeated in a maiden race for the third time at Del Mar, in a race where he appeared to have every chance to go by Bob and Jackie in the lane, I questioned his heart for racing on Twitter, “It’s a good thing the men at Omaha Beach had more mettle than the equine Omaha Beach or we might all be speaking German.”

That tweet didn’t age well. Two starts later Omaha Beach won his maiden – and he hasn’t lost since. In the process he has delivered two of the best performances by a three-year-old all season, annexing a brace of Grade 1s: first crushing the field in the Arkansas Derby and then just getting up in a thrilling victory over a seemingly inadequate six furlongs in the Santa Anita Sprint Championship.

Each of those wins should be examined more fully. In the Arkansas Derby, he showed an affinity for a sloppy surface, staying close to the early pace and powering home like a horse who would continue to excel as distances got longer. In the Santa Anita Sprint Championship, observers like myself thought of the run as merely a prep for a race like the Breeders’ Cup Dirt Mile. He was conceding a major tactical edge to Shancelot, who figured to be motoring along uncontested on the front end. Omaha Beach somehow won anyway, exuding class and proving me wrong yet again.

This was clearly not a horse with any kind of character flaw as my cheeky tweet implied. The reason it took him so long to win his maiden is that he was handled carefully by his master conditioner, not asked to do too much too soon before he grew into his frame. It’s amazing to me – in a good way – that the same horse was able to put in such a brilliant performance sprinting off the layoff. I think he’s improved measurably and he was already really good.

The season has not been without its issues. On the eve of the Kentucky Derby, where he’d have gone off favored, Omaha Beach was scratched due to an entrapped epiglottis. The minor surgery was a success, but there were some hiccups in his training for his return to the races, and that’s why we just saw him again only in October.

The racing fan in me desperately wants to see him in the Classic, and truth be told I think he would have been my selection had he turned up there. But Richard Mandella isn’t the type of trainer interested in running his stable star at 10 furlongs off of one six-furlong prep, no matter how impressive he was in winning it. The Dirt Mile appears to be next, with a race in the Pegasus likely to be his final race (possibly with another race at Santa Anita in between) before he finishes his racing career and goes on to stud.

It’s a shame we’ll likely never get to see him run 10 furlongs, which could have been his best distance, but based on his pedigree and body of work I don’t think breeders will hold that against him in the slightest.

When you’re wrong, you’re wrong. And I’m very happy to have been wrong about Omaha Beach. He may have taken a while to hit his stride but Omaha Beach is one of the most exciting horses to run at this Breeders’ Cup – and his heart is as big as a lion’s.