Last year's Filly & Mare Turf winner is back for more in 2019 and has Zenyatta's record of nine consecutive Grade 1 wins in her sights. 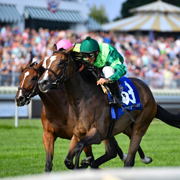 Sunday, October 6 proved to be a fairly momentous day for the ten-year-old mare Starlet's Sister. Of little repute in a short racing career, the daughter of Galileo has transformed her reputation at stud and the achievements of her progeny on that day confirmed that she is one of the great broodmares of modern times. Shortly after 3pm, her colt by Siyouni, Sottsass, ploughed through the Paris mud to finish a fine third in the Prix de l'Arc de Triomphe having annexed the French Derby in June. Just six hours later, and under polar opposite conditions, her five-year-old daughter Sistercharlie scored her sixth consecutive win at Grade 1 level with a victory in the Flower Bowl Stakes at Belmont.

While Sottass may yet run in the Turf, Sistercharlie is again destined for the distaff equivalent having won the race last year. Trained, almost inevitably, by Chad Brown, Sistercharlie is attempting to become the first back-to-back winner of the Filly & Mare Turf and comes into the race having won all three starts this year.

She faced, on paper, her hardest task on her seasonal debut when taking on her very talented stablemate Rushing Fall - who had impressively won the Just A Game Stakes the previous month - in the Diana at Saratoga. Yet Sistercharlie proved well up to that task, bounding to the lead with a furlong to run despite having to move four wide and finding plenty to score by just under two lengths.

The Beverly D was up next and this time bettors were not to be fooled, sending Sistercharlie off at 2/5. Held up a long way off a strong gallop set by her stablemate/pacemaker Thais, Sistercharlie was able to sustain a long run and was again strongest at the finish, well on top at the end, albeit from the William Haggas-trained Awesometank, a limited performer who is little more than a Group 3 horse on home soil.

Sistercharlie's most recent run was in the Flower Bowl and if you weren't paying attention you could be forgiven for thinking you were watching a replay of the Beverly D, as the daughter of Myboycharlie scored in near identical fashion; again held up off Thais's strong gallop and coming through to finish strongly.

That victory took her past the consecutive Grade 1 victory totals of the likes of Wise Dan, Seattle Slew and Affirmed, and it's hard to argue with her trainer's assessment that she is a Hall of Famer in waiting.

Zenyatta's record of nine straight Grade 1 wins is now in sight, which seems achievable, given her talent and consistency, and there's a strong chance that she will move one closer to that total at Santa Anita this November.

Magical may have other ideas – as of this writing, the Champion Stakes winner is being considered for this spot. But it remains to be seen where she turns up, and even if it is in the FM Turf, Sistercharlie will surely take a lot of beating. This has been Sistercharlie’s target all season long, and I wouldn’t rate her chances here second to any equine, not even Magical.