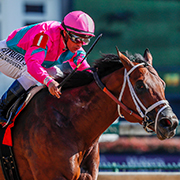 How has the favourite fared?
Two years ago at Del Mar, Battle of Midway became the fourth winner in seven runnings in California to take the top prize at double figure odds. This has not been a division to trust the jolly implicitly! Other than Goldencents, not one of the other five favourites has finished in the frame.

Run record and class clues
Battle of Midway took a road less followed when grinding out his victory at Del Mar two years ago. He had shown decent form in the top three-year-old races earlier in the season and arrived for this off a 2nd placing in the Remington Park Derby G3. He faded very late on there in the nine-furlong contest. His speed figures weren’t spectacular but he clearly was going to be suited by the trip and his best run had come at Del Mar over course and distance.

Four of the winners were West-Coast trained and five of the seven had won either a G1 or G2 but only one of the them arrived off a winning prep.

Run styles
Long sprinters trying to stretch their speed can set things up for closers and generally those on the pace or pace pressing types that are cutting back from nine furlongs or further are the preferred types. Age group?

Battle of Midway became the fourth three-year old overall to take the Dirt Mile, and the second in California. However, four-year-olds have taken four of the six runnings out west.

Draw
There has been a decent spread of winners across the starting gate but there is a slight preference for a middle to outside draw.