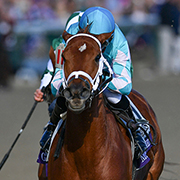 The Distaff has produced some of the most thrilling races at the Breeders’ Cup in recent years and had become the rightful highlight of the Friday programme. However, it belongs on the Saturday with all the other major Championship races and has been moved to the main stage for the second successive season.

How has the favourite fared?
The Distaff has only once had a double figure field when it has been run in California but the quality and competitiveness has been exemplary. Although five of the winners were in the top three in the market, only two outright favourites have been successful, Zenyatta at 1-2 on the synthetic surface in 2008 and Untapable in 2014.

Run record and class clues
It’s a case of ‘Go West Young Woman’ with five of the eight winners in here being trained in their home state and all of them entered the Distaff off California preps.

Seven of the eight winners already had at least one tick in the G1 win column before taking this, with only Adoration, 40.7-1 winner in 2003, doing no better than a G2. All but one of them had finished in the frame on their last start and four of them arrived off a win.

Run styles
Stalkers or closers have prevailed in recent California running, other than in Adoration’s year where pace ace Pat Valenzuela stole the race off the front!

Age group
Age is no restriction in this division, the females seem to stick around longer than their male counterparts and Forever Unbridled was successful in 2017 as a five-year-old but there is a wide spread of age groups represented on the honours board.

Four out of the last five winners had all performed with credit in this division previously and Untapable, the 2009 winner had tackled the Juvenile Fillies at Santa Anita the year before her success.

Draw
The draw has proved irrelevant in this division, mainly due to the shorter fields that have traditionally been entered.