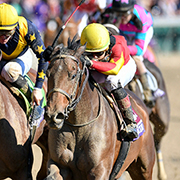 If anyone asks me whether the pace of a race is an important handicapping factor, I refer them to back to back runnings of this race in 2008 and 2009. If you want to know why skip down to ‘Run Styles’ section below.

How has the favourite fared?
This is the only dirt division to show a level stake profit for favourite backers when held in California this Millennium. In addition to three winning favourites, a couple second in the market have also entered the winner’s circle. Unfortunately, that trend ended in 2016 and in 2017 the longest shot of the meeting prevailed when Bar of Gold got home by a nose right on the wire at 66.7-1. She also topped a $27,000 trifecta with a couple of other longshots following her home.

Run record and class clues
Six of the seven winners had finished in the frame in their last race and five of them had a G1 success to their credit, with one other having a G2 in the bank.

Only two of the winners were locally-trained with five shippers getting the job done. No fewer than five of them arrived in California after having their final prep at Keeneland, four of them tackling the TCA Stakes G2. Six of the seven winners had already won at six and half or seven furlongs, the long sprints before taking this one.

Run styles
Long sprints often favour closing types, particularly off a strong early pace. As referred to above, one of the best examples of the impact of pace in a race is provided by comparing the F & M Sprints in 2008 and 2009. In 2008, the field were taken through strong splits of 22.26; 44.02 and 1:07.91 meaning that the deep closer Ventura was running at leg-weary opponents when running them down and scooting away by 4 lengths. The following year more modest fractions of 23.23; 45.95 and 1:09.66 meant that Jonathan Shepherd’s Informed Decision had enough gas in the tank withstand the late flourish.

Age group?
Three-year-old fillies have made little impact and it is the older lasses who have thrived, with four-year-olds leading and five-year-olds by the odd win in seven.

Draw
Bar of Gold at Del Mar in 2017 became the first winner to emerge from the inside of the starting gate. As if often the case, the seven-furlong course involves an extensive run to the first turn which enables the field to get sorted which takes away any bias.