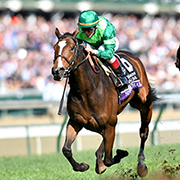 This is definitely one of ‘our’ races and British-trained runners have done particularly well when the race has been contested in California, winning five of the eight editions out west, compared with three for twelve elsewhere.

How has the favourite fared?
Wuheida became the longest priced winner of this division in California when successful at 11.2-1 at Del Mar in 2017. Although only two favourites have been successful, the front end of the market has generally been the place to concentrate on.

Run record and class clues
Although Queen’s Trust, winner in 2017, went to post with nothing more than a maiden win to her name, each of the other seven winners had already collected a G1. Wuheida’s came as a Juvenile in the Prix Marcel Boussac and, although this division was her only victory in 2017, she had finished on the board in all her four starts before shipping. Three of them had won their immediate prep and the others had enjoyed frame finishes before succeeding in the big one.

Unsurprisingly, Chad Brown can be expected to provide the stoutest challenge from the North American based handlers. No trainer based in California has welcomed a winner of this division in their home state.

Run styles
Last time in California, this division was run over just nine furlongs at Del Mar which undoubtedly suited Wuheida. This time around, it’s back to ten furlongs and will be the only division with a start just up the Hillside course. This is another division where runners that have enough early pace to sit handy before striking in the short home stretch succeed.

Age group
The last two winners of this division represented the classic generation but there has been a fair spread across the age groups.

Draw
Six of the eight winners of the Filly and Mare Turf have broken from the inside of the starting gate and that looks particularly advantageous at this trip.