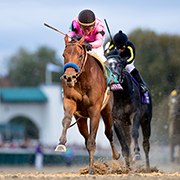 Although only one favourite has succeeded out west, five of the others took the runner-up spot and another took the show dough, something worth bearing in mind for your exotic play.

Run record and class clues
Although Good Magic hadn’t won a race before he collected this division, he did arrive at Del Mar with an excellent 2nd placed effort in the Champagne G1 at Belmont. Other than him, three of the winners already had a G1 to their name but against that, three others only had a maiden or allowance score to their name.

Five winners arrived as shippers with the other three coming from local handlers. Four of them had won their prior race with the other four posting in the frame efforts.

Run styles
All run styles have been successful in the Juvenile and this is another race where consideration of the likely pace profile when the field has been assembled will prove beneficial.

Draw
There is not a long run to the first turn at Santa Anita and post position from the middle to inside has generally been the place to be.