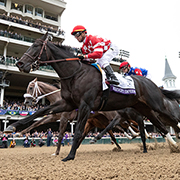 How has the favourite fared?
In the whole of Breeders Cup history this has been the most reliable division with just over a half of the favourites prevailing. Howeve,r in recent runnings if the wheels haven’t fallen off the wagon, they have certainly been loosened.

In the eight renewals of this division in California since the turn of the Millennium, it’s been a game of two halves. The first four editions in the 2000s saw wins for two favourites and a second favourite – the estimable Beholder who went on the add a pair of Distaffs to her CV. Since then there have been four ‘boil overs’ or should that be ‘boils over’? Take Charge Brandi was the longest shot on the board at 61.7-1 in 2014 and a couple of the others rag winners only had one runner each below them on the odds list.

Run record and class clues
Three of the four recent longshot winners arrived with just a maiden success to their credit but in 2017 Caledonia Road (won at 17.3-1) had taken 2nd place in the Frizette at Belmont on just her second racecourse appearance before adding the Juvenile Fillies to her CV. Champagne Room, 33.6-1 scorer in 2016 was another hindsight type as she did have a G2 in the locker.

Five of the eight winners have been locally based and prepped and that would have been six had She’s A Tiger kept the race after passing the post a nose ahead of Rio Antonia, only to lose the race in the Steward’s Room.

Run styles
There has been an even split of run styles among the winners of the division meaning that a study of the pace profile of the race is essential once the field has been settled.

Draw
Caledonia Road broke from the outside of the starting gate when successful at Del Mar but her late closing style was not compromised and, in general, the draw has not been a major factor in the division.