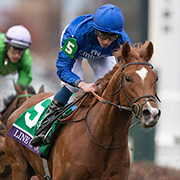 The Juvenile Turf has been held a dozen times in all since its introduction in 2007 at Monmouth Park. Seven of those have taken place around the tight turf tracks at California’s two premier courses and all of them have been contested on a firm surface and that’s West Coast firm!

How has the favourite fared?
Mendelssohn became the second winning favourite to prevail in the California incarnations of the Juvenile Turf when successful at Del Mar in 2017. He was a pretty tepid favourite and the locals sent him to post as the 4.8/1 favourite in a very competitive renewal.

Run record and class clues
Five of the seven winners of this division in California were trained on this side of the Atlantic and six out of seven had their final prep in Europe. Wesley Ward’s Hootenanny had finished runner-up in the Prix Morny (G1) in his immediate prior run. The only winner to arrive off a US prep was Oscar Performance who collected the Pilgrim G3 at Belmont on the way.

Only two of the victors had won their outing immediately prior to the big day and three of them arrived with a score in a maiden as their only tick in the win column. However, four of them had previously finished runner-up in G1 company.

Run styles
No particular run style stands out although, in common with many turf events across the pond, a late kick is a potent weapon. Against that, the last time the race was held in California, at Del Mar in 2017, Mendelssohn stalked the pace throughout before pouncing late to put the race to bed inside the last half furlong.

Draw
In six of the seven runnings of this division the winner has emerged from one of the inside five post positions and Ryan Moore certainly made the most of his mount’s number one draw at Del Mar. Overall the relative success rates of post positions reads, Posts 1-5: 13 frame finishers (37%) v. Post 6-outside: 7 (17%). I know where I’d hope my fancy was drawn.