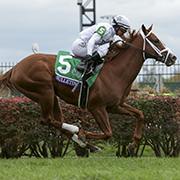 The Juvenile Sprint made its debut as a Breeders’ Cup Division last year at Churchill Downs and again there is a $1million purse, has been elevated to a G2 this year from a Listed event last year. Last year half a dozen travelled to Kentucky to take on the challenge and a number of trainers from this side of the Atlantic should find it tempting.

Last year
Aidan O’Brien’s charge So Perfect fared best of the tourists last year, taking third place behind Bulletin from the barn of Todd Pletcher, with Chad Brown being conspicuous by the absence of any runners from his barn for a Turf event at the Breeders’ Cup. Bulletin was the shortest priced of the US-based contenders off the back of an impressive maiden breaker and he arrived with the clear best Beyer speed figure of the American contingent.

What to look for

Run record and class clues
The Norfolk Stakes G2 at Royal Ascot and the Prix Morny (G1) are two one of five ‘win and you’re in’ events over here, with the Futurity at Belmont, the Indian Summer at Keeneland and the Speakeasy at Santa Anita completing the quintet. Last year Mark Casse’s Strike Silver ran down Wesley’s Ward’s Chelsea Cloister in the Indian Summer but the latter fared better in the main event when taking the runner-up spot at Churchill Downs. He was due to be joined by Ward’s Shang Shang Shang on his first start after his Norfolk success but she was scratched on the day of the race.

Run style, draw and going
Again, runners from Europe will face a wild dash to the bend which will be a new experience for many, if not all, of them.

Last year Bulletin set pretty modest fractions ahead of Chelsea Cloisters and the pair of them were 1-2 the whole way round. The yielding ground was clearly not to everyone’s liking in the Bluegrass and a much firmer surface and strong fractions can be expected at Santa Anita.