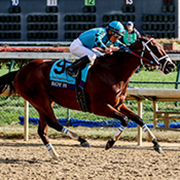 Something has happened to this race since the Breeders’ Cup was expanded with the additions of a turf and a fillies and mares’ version. In its first twenty-four runnings there was just one single-figure field, since then the have been five in eleven years since. The shortest field in the history of the race came in 2016 when Drefong was successful.

How has the favourite fared?
Although Secret Circle is the only favourite to win in California in this Millennium, a trio of others were in the top three in the market, against that the other quartet were head-scratchers. Last time is was held in the Golden State Roy H got the job done as punters’ third choice and he proved it as no fluke when doubling up out of state last year.

Run record and class clues
Six of the eight winners of the Sprint had collected a victory on their final prep and three of them already had a G1 on their record. That is quite something when considering that there are only four such races for older horses at this trip scheduled in US and one of them is this race! Four of them had a graded win on their CV.

The handler with the best record in this race in California this millennium is probably the best-known trainer out West, Bob Baffert, with three successes. However, local horseman Peter Miller is getting quite a reputation after achieving a sprint double-double. He followed up his wins in the Sprint and Turf Sprint at Del Mar with Roy H and Stormy Liberal by taking the same division with the same horses at Churchill Downs last year.

Run styles
Although the early pace has generally been very quick out West with first quarter’s typically being quicker than 21.5s, only once has the race been taken in deep closing fashion and that came on the synthetic surface in 2008. Five of the eight winners in California have raced within 1½ lengths of the leader at the first call – after two furlongs on the standard US result chart.

Age group
There are no definitive conclusions to be reached regarding age but it is worth noting that at a time when three-year-olds race off level weights against their elders at six furlongs in Great Britain, in US they still receive 2lbs.

Draw
The relatively long run to the turn from the six-furlong start means that there has been a wide spread of winning post positions in the Sprint.