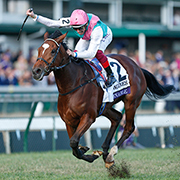 This is definitely one of ‘our’ races and, although less than a third of the runners in California since the Millennium were trained over here, six of the eight winners were shipped from this side of the Atlantic.

How has the favourite fared?
Only one favourite has taken this in California in the last eight runnings and that was Conduit, who became the only repeater when scoring for the second time in this division in 2009. Only four of the winners in total were in the front three in the betting and just five of the jollies manged to get into the trifecta spots.

Run record and class clues
Unsurprisingly, Aiden O’Brien with three winners and Michael Stoute with two lead the Euro invader leader board and Andre Fabre took the division in 2017 at Del Mar. (We might even claim ex-pat Graham Motion as one of ours for his success with Main Sequence, formerly trained by David Lanigan.)

In 2017 Talismanic became the only winner of this division to win without previously having a G1 on his CV. He only had one graded win to his name previously – the G2 Prix Neuille. Just two of the winners came in off a successful last prep and three of them had finished out of the frame.

Run styles
As would be expected, the front is generally not the place to be early in the Turf. Five of the eight winners were in the back half of the field early on and Highland Reel was the only one front-ender to take the win money when given an excellent ride by Seamie Heffernan, making every pole a winning one back in 2016. He won that by 1¾ lengths but the race reverted to type when Talismainc got home by ½ length – it is a surprise to many that the longest race on the card often produces the tightest finishes.

Age group
Magician in 2013 is the only three-year-old to succeed in recent years out west and four-year-olds have the best record in this division.

Draw
Talismanic started from the very inside when winning in 2017, breaking a run three consecutive winners setting out from the outer two post positions. However, over time the post positions haven’t had a huge impact on the outcome.