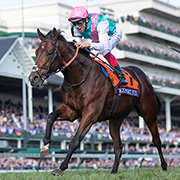 This is another division where invaders from this side of the Atlantic have performed creditably, with French raiders having a particularly good record down the years. That has continued in the new millennium with contributions from the likes of Goldikova, Six Perfections and Karakontie.

How has the favourite fared?
This has been a cracking contest for favourite followers, with major contributions from Goldikova and Wise Dan in California. There have been blips such as Karakontie who the locals let go to post at 30-1, despite the fact that he was the 2014 ‘French Guineas’ winner and had excuses in his two subsequent races.

Run record and class clues
Four of the winners of this division this century in California shipped in from France and the other quartet were from out of state barns. The fact that not one was trained in California is a surprise given the strength of turf talent historically in the state.

All eight winners already had a G1 win on their record but only half arrived with a win in their last start but three of the others had finished in the frame in their final prep.

Run styles
In common with the majority of turf tracks in US, the Santa Anita version is situated inside the standard one-mile dirt oval. The approximately seven furlongs circumference means that tactical speed is essential with the ability to race handy a major asset. Speedy, nippy types do better than long striding grinders.

Age group
Fillies have done well in this division down the years but no particular age group has been dominant, although second season competitors have shown up well.

Draw
Although there is not a long run to the turn, an outside post has not proved a barrier to success. Half of the recent winners have emerged from the outside three posts.