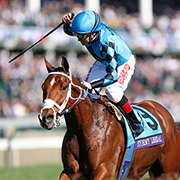 This division has always presented a difficulty in trying to identify any trends because in its six reincarnations at Santa Anita it has been contested on the quirky Hillside Turf course over six and half furlongs. In its five other runnings, it has been contested at either five or five and a half furlongs on a standard flat turf track As at Del Mar in 2017, the 2019 Turf Sprint will be run on the five furlongs turf track at Santa Anita.

How has the favourite fared?
Three of the millennium winners were sent to post as favourite but there have been a couple of ‘bombs away’ winners too, including Stormy Liberal who, in 2017, belied his 30.2-1 odds when scoring at Del Mar. He proved that was no fluke by doubling up last year at Churchill Downs.

Run record and class clues
This is a division in which graded events are sparse across the pond. There are just three – yes THREE – G1 turf sprints scheduled this year in US and one of them is this one. Things don’t get much better further down the grades with only seven and sixteen at G2 and G3 respectively. So, the fact that all seven winners in this division in California had previously collected a graded race is worth noting. However, only one of the seven winners arrived as a winner in their final prep.

California handlers have sent out six of the seven winners of this division, with five of them on the Hillside but Peter Miller proved that the flat tack wasn’t a deterrent at Del Mar. Not surprisingly the only East Coast based winner came from the barn of Chad Brown when Bobby’s Kitten scored in 2014.

Run styles
When this race has been contested over five or five and half furlongs the ability to lie close has been a useful attribute with four of the five winners exhibiting early zip.

Age group?
This division has been a playground for the tough gnarled street fighting sprinters that appear to thrive out West. Seven of the eleven winners since this division was introduced were aged five or older and just one three-year-old has succeeded.

Draw
Given the fact that the Santa Anita turf sprints have been dominated by the Hillside track, this trip has not been used very often. That said there is generally no huge bias, a lot depends on the break and there is also a fair run to the turn to let the field get sorted out.